Not sure about the yellow

Good evening on this last day of the 2012 Olympics

Don't know how much of it you've watched, but I've seen a fair bit, and think it's been absolutely brilliant.  44 World Records and 117 Olympic records set by athletes from all over the world.    I would have loved to have been able to spent some time in London these past few weeks, but it's not been possible.   And Team GB finished 3rd in the medal table with 65 medals.    I'm always very proud to be Welsh, but never been as proud of being British as I've been this past fortnight.

But Olympics aside, I've made a card specifically for the CD Sunday Challenge.   It didn't look right "flat" but I'm not sure the yellow flowers are the right addition.   At least, not that particular shade of yellow.  But at the moment, my access to my craft stuff is limited, for various reasons.   So I went with what I've got, but might change them before I actually give the card to anyone.

And here it is. 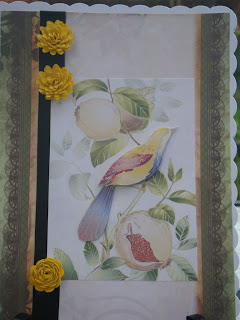 As the challenge title suggests - it has to use something from a CD, and the topic this week is Exotic birds and blooms.  I've used My Craft Studio Quintessential Country Garden.   The flowers were cut with a cricut using the Flower Shoppe cartridge and the little black ribbon was just hanging around.