Doing sewing for a pal who's daughters are in a dance show - these are sparkly pants, along with a skirt and a waistcoat.  I've also done a white waistcoat and a pink lycra outfit, but I forgot to take photos of them 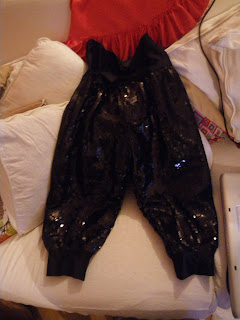 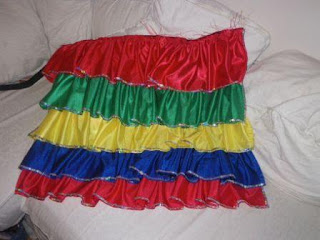 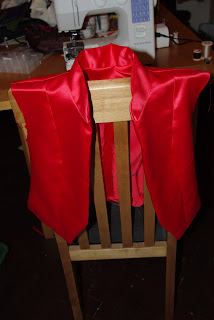 I did not sew on the sequins.

I've got sleeves to finish to go with the skirt, then sew them into a leotard.  And I think, 2 more tops.

A little bit of knitting

Hey folks
Over the past week or so I've done a bit of knitting.   I have watched a bit of Create and Craft (channel 671 on Sky in the UK).  Can also watch online on http://www.createandcraft.tv/  On this craft channel, not only do they do lots of papercrafty stuff, they also do other things, one of which is knitting.  I was particularly taken with some products made using the yarn Flamenco.  This yarn is a bit like a fishnet ribbon type yarn, and you knit into the holes,but was a little put off by the price, so hadn't ordered anything.    Then 2 of my work colleagues came in one lunchtime both having bought this "fancy" yarn.  The next day, one of them came in wearing a scarf she'd made with it.   I don't think it was the same yarn, but it gave a very similar effect.   She told me she bought it "in the market" but she'd paid £10 for the ball, and it was only £8 in Cwmbran (which is where I live).   Which actually made the price on C&C seem quite reasonable, because it was 3 balls, the pattern and the knitting needles for about £24.

So then I went shopping, I went "to the market" to the only stall that I know sells wool/yarn.  And they had the exact same yarn in there that is on the telly, and it was £3.50 per 50g ball.   So I bought 2 balls of citrus green in Flamenco "floating"   This is yarn which changes colour from one end of the strand to the other.   The other type is Flamenco "twin" which is a different colour on each side of the yarn.    It would be so much easier to explain if I'd had the sense to take a photo of the yarn itself.    I'm still in the middle of knitting the citrus scarf, but went back the following day and bought a corally colour to make a flower or two. 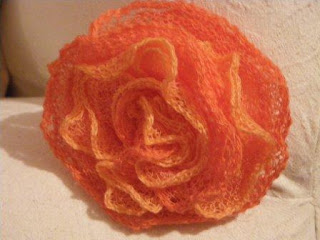 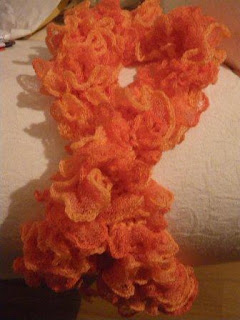 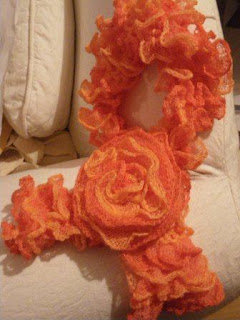 Started a card, it went wrong, didn't get time to correct it before a challenge finished.  I'm sure you'll see why it's broke 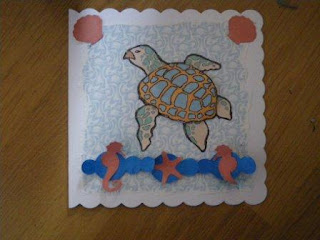 Turtle is from Creative mind of Sylvie (will add link later)   other cut outs are SVG freebie files for cutting with SCAL.
Posted by Georgiegirl2012 at 14:16 1 comment:

As mentioned the other day I bought Sheena Douglass Paint Fusion Pick of theWeek from Create and Craft a couple of weeks ago, but chickened out of actually painting the last time I tried it.  So, getting bored with the rugby today (knowing that Wales were unlikely to beat the French by 27 points to win the 6 Nations, and in fact they didn't)  I turned on my recorded paint fusion shows from a couple of days ago,and decided to give it another go. 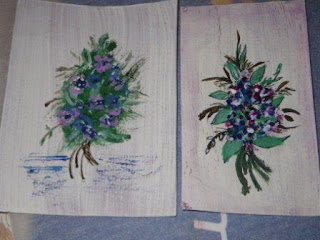 The first attempt was ok, but not something I would want to put on a card, but the second attempt was much better.

I have not, yet, bought the recommended paints,  but I have ordered some decent brushes, which were a bargain from Cowling and Wilcox

That's it for now,

A make and an altered image 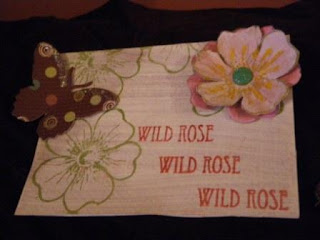 The Wild rose paint fusion card I made just didn't look right, so I cut the top off and will use it as a topper on something.

I also made a box.  A lad I work with is going to a christening and his "missus" didn't like the box the gift came in.  I offered to make a replacement box.  Not sure it will be suitable for what they want it for, as it's not particularly babyish.  I did say there was not obligation to use it.   It's a nice box, and given that I've never made one before, then I'm very pleased with it.  I'm sure there was a quicker way to do it, and an easier way to do it.  But it looks fine to me. 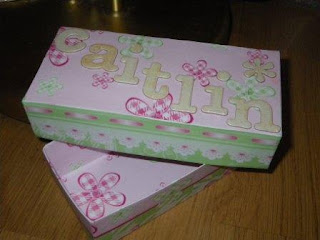 Oh, and in case I forgot to mention it to anybody I came into contact with today - I won a prize.  I don't know what it is yet, but is somthing fairyopolis
Posted by Georgiegirl2012 at 23:51 6 comments:

Many years ago, there was a crafter called Donna Dewberry who regularly appeared on QVC with her folk art painting.  I admired, but never did.  2 or 3 weeks ago Sheena Douglass was on Create and Craft with a similar technique but using easier paint techniques, and using rubber stamps along with it.  Examples of her work can be seen here   So, being very easily led I ordered the Pick of the week which included the DVD of techniques and half the stamps which are currently in the range.  Now, I have to admit, that I bought it more for the stamps than the techniques, but did like the look of the finished designs so thought I might as well give it a go.

I decided not to invest in the recommended paints(pebeo deco acrylic matt) , just in case it turned out not to be my thing, so didn't have, obviously, the correct texture acrylic paint, having com to the conclusion that £4.99 for 20 tubes of acrylics from the Works would do to practise with.

Painting the background was quite straightforward.   To get the crackle effect desired, you paint the base material (board recommended - me used watercolour paper) with dark paint (any old paint will do, so I used a dark pink emulsion left in the cupboard).  Then when that is dry you paint over with cheapo PVA glue, and then when that is semi dry you paint over the top again with a light paint (such as magnolia emulsion paint)   The result (obtained much quicker if you have a heat gun) gives a rather nice crackle effect. 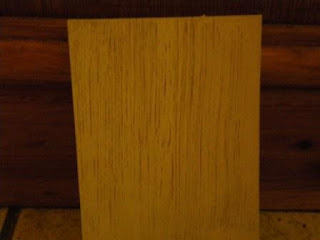 So whilst I was waiting for this to dry, I stamped an image or two, and painted them with the acrylics, the result was so-so but as I thought - I'll get better.

So then, taking one of the 6 backgrounds I prepared (the one in the pic above is the best, and not the one I started with) I did some stamping.

And then chickened out of doing any more painting, cut out the flowers I'd already painted and added ti to a plain card.  But given that the paint had caused the card to curl, I stuck it down to within an inch of it's life and unfortunately, didn't stick it straight. 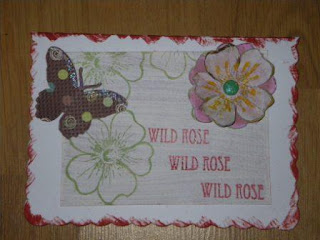 So I might end up cutting it off and resticking it to something else.   But they are nice stamps.

I'll give it another go soon.

I don't have any fairy stuff, and having heard that Crafter's Companion are having an Ideal World POTD next Tuesday (15th) and are having a blog hop to give sneaky peaks and the opportunity to win some fairy related goodies, I thought I just had to do it.  Now, much as I want to win, thought it a little bit selfish to keep it to myself.   But it's all horrid and you don't really want it anyway xxxxxxx
Posted by Georgiegirl2012 at 11:53 2 comments:

It's been a very strange day - last night I didn't get to sleep until at least 3.30, was up again by 9.00 am and am well in to at least my 3rd wind of the day - I haven't had a sleep and am strangely very wide awake again, but will shortly force myself to go to bed.  I have been quite busy today, so maybe that's why - I shouldn't slob around all day - if I do stuff, I get so much more done.  Funny that eh?

It's my friend's 50th birthday today and although I did finish her card yesterday, and I have sent it to her via picture text message.   She hasn't actually said whether she received it or, indeed her happy birthday text.  I have sent her wishes via facebook but didn't want to put the card on there until she's had it in person, which she won't do until Friday.

But I wanted to share, so, cyberchums I will share it with you.   It is another easel card which I rather like, but am still not convinced I have the card the right way round.  I was watching Create and Craft today and they had it a different way round.  But then as they said "there are no rules" 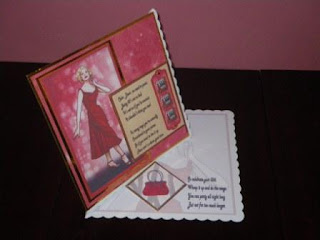 Apart from the verse which I found somewhere on the internet and adapted slightly it's all MCS Fab Glam Fifties.

in the dining room.   I was trying to have a bit of a tidy and came to the conclusion that I really don't need to buy any more quilting stuff before the next century.   Other, perhaps, that a bit of thread.  I think I have 4 full size quilts already layered up ready to quilt, half a dozen wall hangings, and a couple of cushion sized things.   Plus I have about 5 tops to finish.  I will try take some photos tomorrow.

So, as I'm sure you can understand, feeling I've done finished something is not a feeling I'm used to.   Nevertheless there are a couple of things I've done - yes - cards. 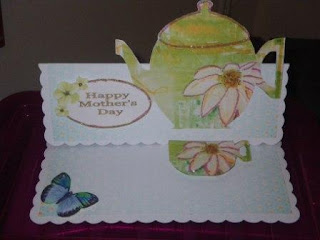 I now have the My Craft Studio 4CD/DVD encylopaedia of card and  papercraft templates, so using a teapot template I made a mother's day easel card - it hasn't turned out quite as elegantly as I would like, but as a first attempt at cutting out a teapot and teacup I'm fairly pleased with it. 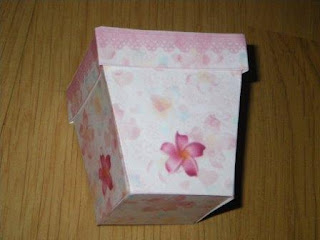 Also using this CD I've made a little plantpot holder.  Now, there is a reason for this - the girl I sit next to, and the lad I sit opposite were taste testing chillies last week, culminating in tears rolling down cheeks at the hotness.  I am too much of a wimp to take part in such a taste test, but as a result of the taste test, they decided that they should try and grow their own on the office windowsill, and invited me to take part.  So I thought, that in order to differentiate between pots, we should have our own holders.  So given that I don't know what size pots we will have this is a tester pot. 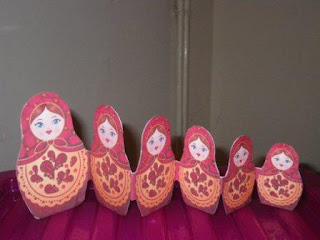 Finally - for now, using the the "little bit of folk" cd, i've made some russian dolls.  They are quite small, so I am thinking of adding them to a card, but haven't yet decided how to do it, but I imagine they will make another appearance in a future blog.

Either later tonight, or tomorrow I hope to make my friend's 50th birthday card.  And given that her birthday is tomorrow, I had best get a move on.