looking for a cable

I eventually finished the first side of the fence but didn't have the SD card in my camera and can't find the cable to upload from camera.

So instead have a picture of some shoes that I don't think I'll ever wear again given the way I'm aching right now. 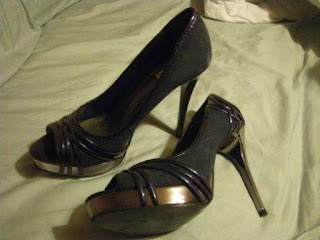 I bought them quite a while ago after a friend told me she had seen the most fabulous shoes in a charity shop, but they were too big for her.   So I went and bought them.


It's later - I've brought the laptop to my bed in the likely eventuality  I can't get out of it tomorrow.

Firstly - approx 6.45pm - I had been taking regular breaks because I'm not full of beans, and can't keep going from start to finish (certainly not when it comes to painting a fence anyways) and had been told, by a FB friend that I had to stop slacking off and finish it.   So this is what it was like at that point. 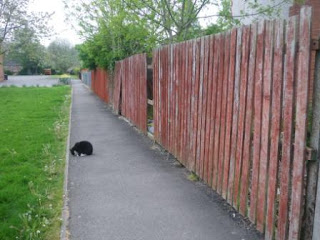 And then, shortly after 8.30 when i had finished it - although truth be told, I will have to do a bit more if I'm to finish this side properly - as you can see it's not a fence made up of fence panels, it's made up of planks of wood - at the last count 217 still standing (should be about 225) and really the sides of each plank should be painted.  However I was running out of paint in the tub I was using, so on the last few planks I didn't even attempt to do the sides. 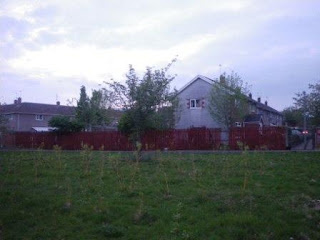 I know I still need to go back to my post of this morning and complete the details about the card, but there's always tomorrow.

A quick, earlyish morning post before I go and paint the fence 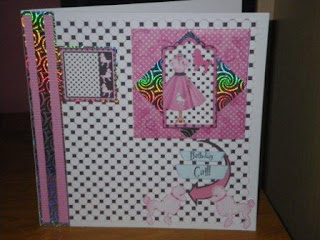 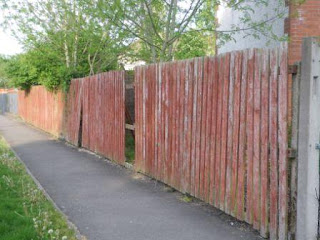 I think it's Easter Sunday, and with that in mind I'm giving you the opportunity to win some blog candy (which,not being an Easter Egg won't make you fat) courtesty of Maria Simms.  Maria and I are FB friends, but I can't remember if I asked her or she asked me,   But either way we are friends and she is a very talented lady.   So talented is she that she is on the design team for, amongst others, Barbara Gray and HunkyDory.  This weekend she was introduced as a new guest craft demonstrator on Ideal World so I went in search of her blog and discovered she is giving stuff away.  So, being the generous soul that I am, I thought I'd tell you all about it.  And it's got nothing to do with the fact that it's a condition of the giveaway that it's posted on your blog.  Nothing I tell you........

And, with my frugal head on (which is still not doing so well) by using TopCashback I have earned myself about £100 of cashback.   So using some of this I have ordered a couple of crafty things from Amazon, and I am about to receive my 2nd payment which I'm opting to get as credit to my paypal account.  I then intend to use this to get a brayer and some big and juicy stamp pads so that I can practice with the Barbara Gray stamps and free DVD I ordered from C&C in the big Easter weekend giveaway (DVD free)   And to bring this entry back full circle, I also ordered the gorgeous HunkyDory pick of the week (with free luxury cards) on which show was the lovely Maria.

Just as well it's payday before the the paint fusion POW on Royal Wedding Day.

Yet another week has disappeared when I don't seem to have acoomplished anything much.  Now I know that's not true because I completed, and submitted, my Key Skills section for my Customer Services level 3 NVQ.  And not only that, I had an e-mail from my assessor telling me I had achieved.  I completed 4 staff reports and transferred the details from another 6 into a new format.   I also went to the show for the dance school  I did the costumes for.   It was very good, but given I started work just after 7.30 in the morning and didn't go back home until 11.00pm at night I was extremely tired by the time I got back.    And then I received a text from my eldest asking if I was coming home.  So I replied to say "I am home and I've put the bin out and the recycling boxes and I've made a cup of tea and I'm about to go to bed"

So this morning - Good Friday - I had every intention of spending half the morning in bed.  Unfortunately I was wide awake before 8.00 am so I got up, took my book downstairs and turned on the TV.  Which, somehow managed to turn itself onto Create and Craft.   I fell asleep on the sofa and woke up again just after 12.00. Been all out of sorts since I woke up, and I'm not convinced buying 9 CDs and a cardmaking kit made me feel any better.

But I did get a bit inspired and made a card. 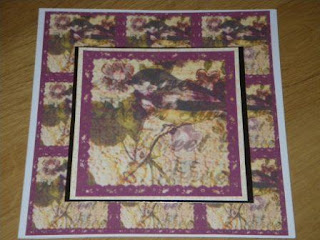 For this I used one of my many (soon to be increased by 9) MCS CDs.   The background and the topper are the same picture, but the background on is smaller and tiled.
And given that I also made a little union flag, using the picture from a free Rowan scarf pattern﻿ so I supposed I haven't been as unproductive as I thought. 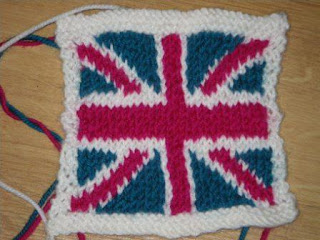 It's going to be a pincushion

I've got 11 days off now, so hopefully will get lots dones

This is the card I managed to make last night 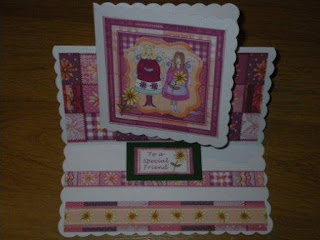 It is stupid o'clock on a saturday morning - I struggle to be up and about on a week day at this time so why on earth would i want to be up and about at 7.00am on a saturday.    So I've decided I'm going to go back to sleep for an hour or so, and come bacck and finish this later when I'm a bit more awake
Posted by Georgiegirl2012 at 07:20 1 comment:

For those of you who are avid Create and Craft watchers, you may have seen last week's Pick of the Day - Rupert Bear (no "the" in his name).  I'm supposed to be on a frugality phase, but it doesn't seem to be working.   Sometimes the delivery times from C&C are appalling, but this was fairly good.   I ordered it on Tuesday night and it arrived today (Monday)

So of course, I just had to drop everything and play.

The artwork is taken from the covers of the Rupert Annuals between 1936 and 1950 (so that's 30 images plus extra decoupage bits).   I received a cardmaking pack for making tunnel card books and a CD for tunnel cards (at least that's the tagline, it will probably get adapted).   I used the images from the card pack that I liked the least, so that way I wouldn't mind too much if I wasn't happy with the result.

I'm ok(ish) with it, but it would have been so much more professional if I had used a paper trimmer (rather than a little scissors), had done it at the table (rather than on my lap) and also had taken my tea things out to the kitchen (rather than leave the curry plate nearby).   Plus I should have double checked the folds before I stuck things on them, but that's only really bugging me because in reality it doesn't look too skewiff.

So here it is 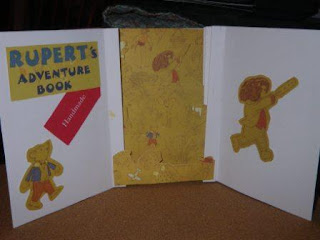 Hi folks - Gill is giving away a CD. 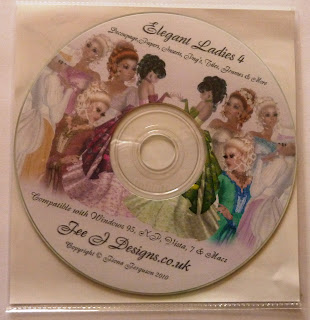 I've just finished knitting the front of a cushion cover which I believe is going to be a sample on the telly!!! 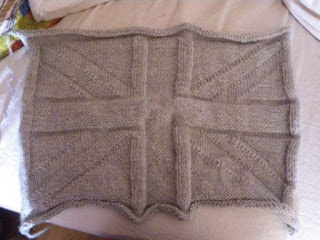 As you can probably tell from the title of this  post, I've had a migraine.  I've slept the whole day away, sent my son out for tablets, and then slept some more.   But now I feel much better and am doing some knitting.  Along with 2 scarves, I am also knitting a sample for Create and Craft - maybe one day fame will come knocking.

I have also finished another part of the dance costumes - I will be going to the show, so hopefully will be able to take some photos of the costumes in action. 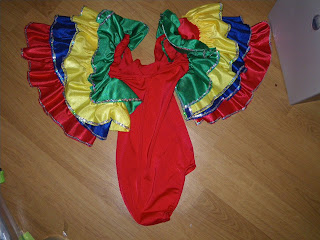 i didn't make the leotard, but I did add the frills, or, as I like to call them - fruffles.

But for now, back to the knitting and a cup of tea.  No chocolate and wine for me tonight because I have a feeling they could well be the culprits for today.